June is Pride month. A chance to reflect on the strides made towards achieving equality and to acknowledge that there is still a way to go, as well as a time to celebrate the breadth and diversity of the LGBTQ+ community.

With that in mind, we thought we’d take a look at just a few of our favourite suit-wearing, barrier-smashing, world-changing LGBTQ+ icons. Some you’ll know well, some you may not...Let us know who you’d like to add to the list!

“Be yourself. Know your proportions. And have a good tailor.”

This is one of our favourite quotes here at King & Allen and no one knows how to be yourself better than the undisputed “fierce angel” of the 21st Century. Infinitely wise, completely tenacious and a veritable powerhouse of sartorial flair, RuPaul Charles can pull off an Elizabethan gown (with full headdress), a skin tight minidress and a impeccably-cut two-piece suit with the same level of effortless, stylish aplomb.

There are so many looks we could choose from but we decided to go with this rather understated, pink double-breasted suit that RuPaul wore to the Emmys last year. The pink is beautifully vibrant and the contrast black buttons are paired perfectly with the crisp shoes, giving a totally smooth look that is also full of joie de vivre.

A King & Allen favourite, ever since we made her wedding suit three years ago, Lucy Spraggan is a phenomenally talented musician who has released five albums, with her current offering ‘Today Was A Good Day,’ still storming the charts.

We’ve been lucky enough to make quite a few suits for Lucy over the years and they’re all different, all reflective of the singer-songwriter’s personality. We’ve chosen to spotlight the green suit she had made with us in 2017, specifically for her 'Cave Show' - a sold-out gig in Peak Cavern, Castleton. 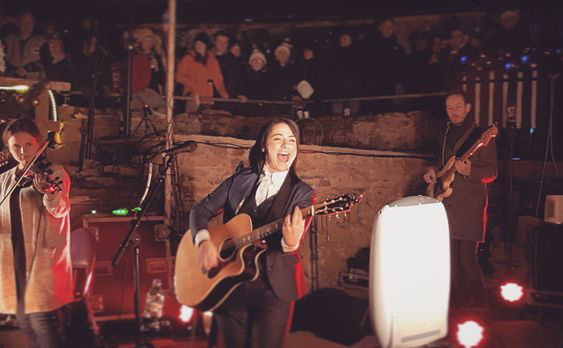 “You can’t be afraid to be you. Those who don’t dare, don’t live. Initially, it will be very tough, but don’t let the problems scare you, because beyond hardships, you get happiness like you felt never before.”

Nepalese model, Anjali Lama was the first transgender model to walk for Lakmé Fashion Week (the biggest event in the Indian fashion calendar) and has, more recently, been a part of Calvin Klein’s latest campaign alongside other big-league names.

We love this gold lamé, two-piece suit. This has a more oversized fit which makes it look relaxed and modern, while also being magnificently iridescent, catching the light in a way that makes the whole outfit shine, like the wearer herself.

We would be remiss to create a list like this without including the king of ‘suiting up,’ Neil Patrick Harris. The actor, best known for his role as Barney Stinson on ‘How I Met Your Mother,’ is also an ardent advocate for LGBTQ+ rights, donating to several charities and speaking out for equal marriage.

There are so many Barney Stinson sartorial smashes, but we thought we’d choose this look, which is a stand-out style statement. The jacket complements his husband, David Burkta’s jacket. We love this couple’s ability to choose looks that are at once individual and cohesive. The mark of a great relationship!

We love Cara Delevingne’s style, from her legendary brows to her love of sharp tailoring. We also love the candid, open way she talks about her sexuality and sexual fluidity, placing herself as a highly-visible role-model for LGBTQ+ people everywhere.

We have chosen this moment when she rocked up to Princess Eugenie’s wedding in a morning suit that expertly combined both masculine and feminine elements to create a look that is totally iconic.

When Billy Porter glided onto the red carpet in this tuxedo gown, we were blown away by the cut, style and beauty of the whole ensemble. In one, totally elegant moment, Billy Porter turned decades of Hollywood gender roles on their head. He is a strong proponent for fashion being a way to express his identity and inner sense of self.

"We’re all supposed to be different. I want so badly to encourage everyone to say, “Who am I and how do I want to live my life?"

Of course, no list of LGBTQ+ suited icons would be complete without a nod to the queen of tailoring perfection, Ellen DeGeneres. Ever since she came out on her eponymous TV-show in the nineties, Ellen has been a symbol the world over for being true to who you are, even in the face of adversity. And we love her abundance of suits; from her white wedding suit when she married Portia De Rossi to the Yves Saint Laurent suit she wore for the Oscars’ promo material.

The look below is a classic midnight-blue tuxedo-style jacket with contrast black lapel. Teamed with a crisp white shirt with a collar bar for a formal, yet relaxed style.

Who would you like to see added to this list? Let us know on Facebook, Twitter or Instagram. If you've been inspired by any of the looks, come in for a free consultation and we can make you your very own iconic suit.