The History of the Button

In our fast-paced, modern lives, where trends come and go overnight, we can often take for granted the most fundamental of things. At King & Allen, we are huge fans of tiny details and believe that we should pay them the homage they deserve. With that in mind, we thought we’d delve into the history of the unsung hero of any bespoke suit: the button.

But where did buttons come from? Who was the first person to come up with this essential, often overlooked, part of most modern clothing?

The Indus Valley Civilisation are credited with the invention of the button and the earliest one we have in existence today dates from around 2000BCE and is made from a curved shell. The first buttons were used as ornamental embellishments to a person’s attire and signified wealth or status.

They had small holes drilled into their surfaces and were attached to clothing by thread, often forming geometric patterns rather than the straight lines we know today. As the centuries progressed, the button became used more and more as a fastener for clothes, with the ancient Romans using them to fix clothing in place with pins.

However, it would be a long time before the invention of the buttonhole and the fully-functional button we know and love today.

Over the centuries, the button evolved from an embellishment, to a more practical item. The middle ages brought with them the invention of the all-important buttonhole, which was to quietly revolutionise clothing. A stunningly-simple but elegant design, the geometrics allowed for the button to pass through the opening and be slotted firmly in place.  Fashion would never be the same again.

Buttons would still be the preserve of the rich and fabulous for years to come, until the mass production of the Industrial Revolution saw the button become a ubiquitous staple. The style was pared-down, the shape flattened-out and four holes were drilled into the surface, meaning that it could be quickly and securely attached to clothing.

Buttons nowadays come in a wide variety of colours and shapes, but the flat, circular shape still remains the most popular.

In traditional tailoring, the horn button is usually favoured but recent years have seen a rise in alternative materials, such as the corozo button. This is made from the nut of the corozo tree and, due to the grain of the nut, each button is completely unique, like a fingerprint. 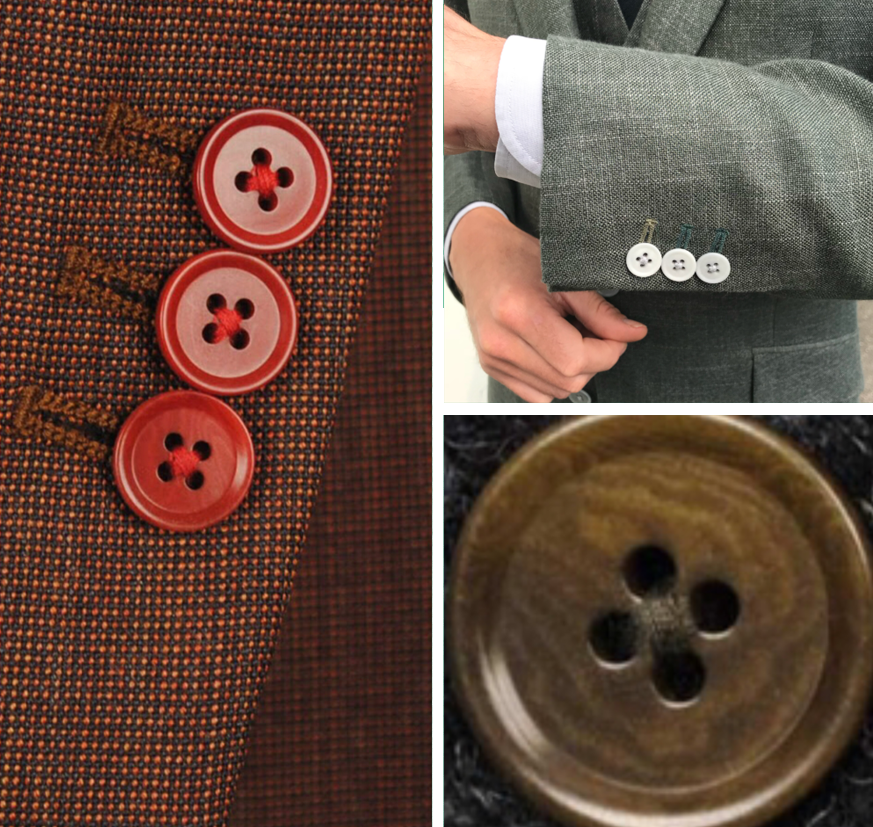