1. Military style high cut double breasted. Sales of double breasted suits continued to increase in 2013 and we only expect their popularity to rise further this year. There are a plethora of different styles to DB (we offer 7) but the one we think will really take off in 2014 has a short lapel and a high gorge, very much like a naval military jacket. We would recommend a 3 show 4 or a 4 show 5 (depending on your height). Here it is being sported by fiction’s most famous naval commander (who is 6ft, 2): 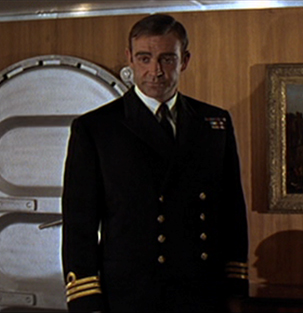 And here is a similarly cut jacket in a Prince of Wales check tweed, made for a man who is 5ft 10, The look is striking, smart and distinguished, but as with all the best styles there is a practical reason for its popularity. The double breasted jacket is an extremely flattering cut: if you’re tall and slim it gives you shape and detail where there was once empty space. For the chap with a belly or paunch it can hide a multitude of sins – especially in a heavier cloth. 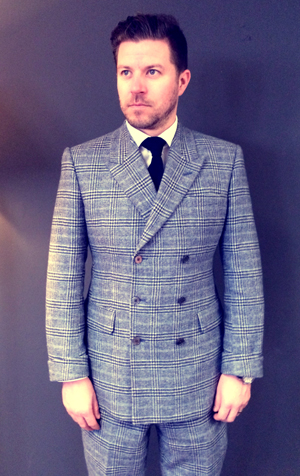 They turn a regular 2 piece suit into a work of art. They look that good.
They are subtle. You won’t feel like you’re drawing too much attention to yourself when you wear one. They have understated style.
They are flattering – tucking you in in just the right places.
They go brilliantly with a tie pin or tie bar. There’s the practical reason of keeping the tie in place, but also the aesthetic justification since there’s now so much more tie showing.
They look great at weddings (see point 1).
They look great in the office (see point 1 and 2 combined) .
They look even better double breasted (see above) so you could make your first foray into DB without going the whole way.
It looks very bespoke. Enough said.

We first predicted that separates (sometimes known as layers) would become de rigour back in April 2011 in King & Allen’s monthly e-magazine – The Stitch – and since then the simple combination of unmatched jacket, trousers and/or waistcoat has grown hugely in popularity. This is in part because it says so much about the wearer – it shows an acute sense of style (in particular an awareness of colour and cloth). But there’s a practical reason as well: it also means you’re getting so much more use from your suits.

In 2014 we predict that this combination-lead style of dressing will become especially popular in tweed, where one can rain down all manner of contrasting styles, colours and patterns all safely under the umbrella of the source cloth. Perhaps it’s the rugged outdoor nature of the fabric, perhaps it’s the way it drapes so perfectly – but ‘clashing’ in tweed just works.

Here’s an example we put together for an article about looking stylish at a wedding where we’ve combined three different colours: 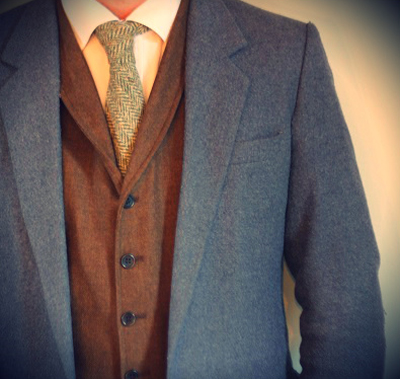 and here’s an example from one of the London Collections: Men catwalk shows where the patterns themselves clash:

This is a really stylish, simple cut – a fantastic blend of a classic two piece and a dinner suit (tuxedo) that we think could really take off in the next year. Traditionally a shawl collar belongs on a black, midnight blue or white dinner jacket:

and to break with that convention one must tread carefully. Our advice with this style is to keep the rest of the choices subtle: simple colours in blues, greys or browns with the minimum of detail or accessory.
style-advice-cut-and-style-shawl-lapels-in-colour

We spotted this from the Richard James catwalk show at London Collections: Men and although it’s a great example of the cut, it would probably look better in a darker shade. 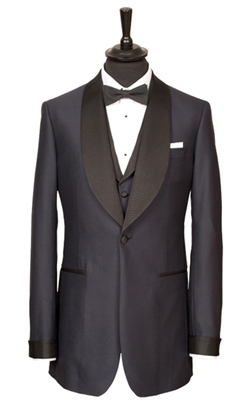 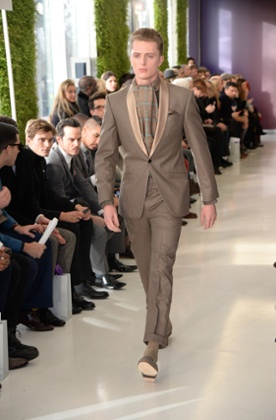 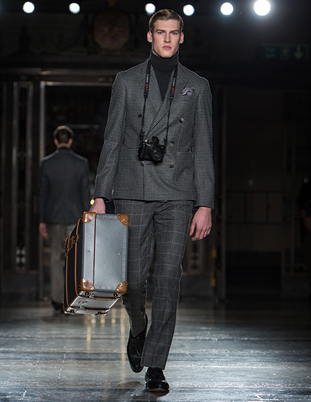 Note the roll neck: love them or hate them – you’ll be seeing a lot more of those in 2014 as well!

In the next article we’ll be looking at Colours and Cloths. Make sure you don’t miss it by following us on Facebook / Twitter or by signing up to our monthly e-magazine.