The Suits from ‘Kingsman’

January 2015 saw the release of Kingsman: The Secret Service. This action/comedy is about a fictional Savile Row tailor that secretly houses the headquarters of an elite spy force.

The story was inspired by director Matthew Vaughn’s own experiences of buying a bespoke suit on Savile Row. During the process, he daydreamed about pulling on a hook on one of the walls, opening a secret door.

The heritage of the English gentleman spy extends way beyond Bond – to Tinker Tailor Soldier Spy (also starring Colin Firth), The Ipcress File (also starring Michael Caine!), The Avengers and The Saint. By focusing his plot on the quintessentially sartorial super-sleuth, Vaughn has seen an excellent opportunity to outfit his cast in some extremely sharp suits.

Kingsman Tailoring
What has most impressed us, here at King & Allen, is Vaughn’s insistence that the cast is decked in double-breasted suits throughout the film – when the single breasted option is so much more popular (in the off-the-peg world, at least). Vaughn has pulled off this bold move with great aplomb, and as a result, the film is brimming with visual elegance.

Below, we break down a few of our favourite suits from Kingsman…

Our Favourite Suits from Kingsman: The Secret Service 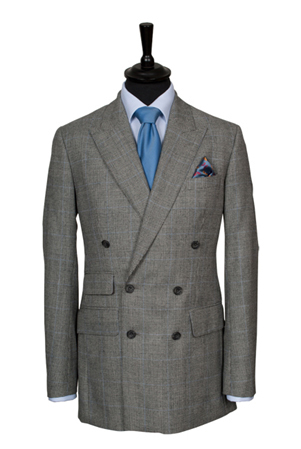 A suit, similar to the one Colin Firth wears in the film, ‘The Kingsman,’ made by King & Allen.

The double-breasted suits in the film are predominantly 6×2. Colin Firth’s suit, here, is a lovely example of a light grey worsted.

This is the most monochromatic of the suits from Kingsman. Simple and understated; this a lovely example of a simple, conservative business suit.

To the far left, you can see an example of a similar suit we have tailored.

This is a fantastic example of business power dressing. The double-breasted cut only serves to complement the sense of boardroom armour. Note that this suit has a boutonniere (buttonhole) on both lapels – a lovely bespoke touch.

here, you can see a similar one by King & Allen. 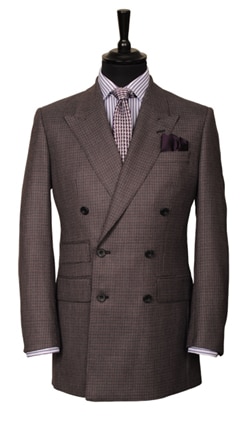 Onto eveningwear now, and above is a classic shawl lapel – paired with a splendid bow tie and white pocket square.

Below is a classic dinner jacket by King & Allen, similar to the one worn by Colin Firth. 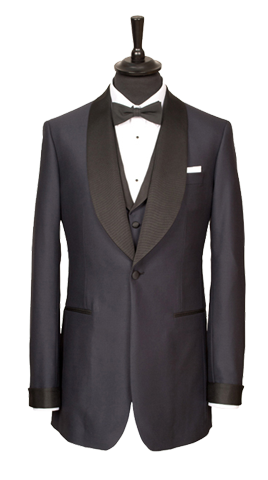 An actor who always cuts a dash both on and off screen is Michael Caine. His role as the head of the Kingsmen has allowed him to really stand out.

Here is the veteran actor looking resplendent in a grey double-breasted suit with yellow windowpane check.

Note the milled finish on the cloth – this is much more English way of finishing cloth.

Shakespeare once wrote “Clothes make the man” – and if a film were ever able to prove this adage it’s Kingsman. The main protagonist of the film is ‘Eggsy’ (played by Taron Egerton) – a delinquent who Harry Hart’s character takes under his wing.

The transformation is extraordinary, with the help of a splendid chalk strip, a classic club tie, a pair of glasses and an ice white pocket square.

Note the “roped sleeve head” – another nod to the traditional British bespoke suit.

Want to wear a Kingsman Suit?

King & Allen offer bespoke versions of all these suits, with no extra charge for double breasted, roped sleeve heads, double boutonnières or any of the extras you may have spotted.